Tis the season to be frightened! At this time of the year when the veil between the two worlds is thin, one can’t help but be drawn to tales of ghosts, haunted houses, and the unexplained. Stories that we know can’t be true, but then again...the possibilities are chilling! After all, science may not be able to prove that ghosts exist, but they have yet to prove that they DON’T. So, in an effort to personalize your Halloween, here is a daily dose of spooky things that go bump in the night, and in the sky for that matter. Thirty-one frights of Halloween!

Curses and The Witches Castle 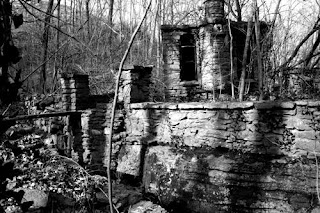 It seemed like a sure thing. A river port town located along the bank of a small cove just east of the hazardous Falls of the Ohio¹. James Noble Wood, the founder of Utica, Indiana, did everything he could to bring his vision to life, even acting as the first ferryman in the area. But despite all of his hard work, the town never became more than just a quick ferry crossing to and from the more popular “Settlement” of Louisville located across the river on the Kentucky Shore. It didn’t make sense. Utica had many things to offer: location, natural resources, a secure cove, and a beautiful shoreline. Yet, there was a disconcerting aura surrounding the area, a foreboding that seemed to drive potential commerce away. Even Utica’s beautiful Quarry Bluff had an eerie and remorseful feel about it.

There were rumors that the town was cursed. Wood was suspected of stealing the land on which he developed the modest town from three old spinster sisters of Métis² descent. In the Treaty of Paris, the British had ceded the Native American territory to the United States without informing the native land owners. Wood claimed the land in compensation for his military service and evicted the sisters. They did not go easily. A standoff ensued. After days of threats and gun fire, Wood assembly a vigilante party and stormed the house. The three sisters were disarmed and physically dragged from their home kicking and screaming. After being securely tied up, they were thrown on a makeshift raft and sent down the river towards the Falls of the Ohio and to their certain deaths. The eye-witness reports are distributing. Bloody, beaten, and trapped on the raft, town folk recalled watching the sisters struggling and wailing helplessly, when, without warning, all three sisters suddenly froze, their bodies becoming unnaturally stiff. Minutes passed and those on the shore wondered if rigor mortis was sitting in, the sisters having died from the shock of the ordeal. But then, a most unnerving, quite frightening thing happened. The sisters, moving as if they were one, slowly lifted their heads in unison and glared intently at the vigilantes and gawking town folk, their eyes unnaturally wide and full of hate. Then suddenly, as if possessed, their bodies started shaking with rage and the sisters, raving manically, spewed curses and obscenities at the witnesses on the shore, damning them all and their descendants. For over one hour the townspeople morbidly watched as the raft slowly floated out of sight, the sister’s curses fading in the distance until they were heard no more.

Perhaps it was horrendous, unconvicted crimes of the vigilantes or unease over the sisters’ wrath that dissuaded most businesses from locating in Utica, but it was the construction of the McAlpine Locks and Dam in 1830 that finally devastated the struggling town and solidified the legend of the sister’s curse. The bypass canal built around the Falls of Ohio redirected water traffic away from Utica, turning it into a virtual ghost town.

Years after the construction of the dam, another family of three sisters settled in Utica. They lived on the outskirts of town, in a curious castle-like stone shack built on an isolated, wooded hill overlooking the Ohio river. The town folk considered them unfriendly for the sisters rudely shunned their neighbors and made no attempt to interact with the community. And the sisters were strange, very strange. They rarely ventured out during the day, preferring to forage through the woods late at night, their lantern lights seen floating eerily among the trees. Baskets filled with odd roots, geodes, and animal bones were piled up on their front porch, and repugnant smells issued from the chimney. “No Trespassing” signs were posted around the perimeter of the property and warning shots would be fired at all unwelcome guests. It was rumored that the sisters were witches, and the townspeople did their best to avoid them. That is, until children started disappearing—five children within a month’s time. Suspicion soon fell on the witches, and a raid of their house unveiled a grisly scene. What appeared to be human skins were hanging on a makeshift clothesline across the back of the main room. Tossed in the corners were piles of small human bones. And, stewing in the pot over the fireplace was what appeared to be a child’s heart. Tried on the spot, the three sisters were found guilty of cannibalism and witchcraft, hung until dead, and their house burned to the ground.

In the 1950’s, the witch’s castle was rebuilt as a tourist home called Mistletoe Falls. But the business was beseiged, some say cursed, with a multitude of problems. After an unexplained fire burned the structure to the ground, the castle was abandoned.

Today, all that remains of the witch’s castle is the foundation, the fireplace, one wall, and a filled-in basement. One of the shacks behind the ruins is still pretty much intact, consisting of two windows, two doors, and a fireplace. Many paranormal investigators and sightseers to the castle have reported hearing and even recording auditable voices and strange noises. Faces of children also have been seen peering out of the shack’s windows. The most active sightings are of a young faceless girl, around 8 or 9 years old, with long black hair and wearing a white dress, seen wandering aimlessly around the ruins and woods.

Utica, a town born out of violence, seems unable to wash away its bloodstained curse. In 1992, a horrific crime occurred, the result of years of sexual abuse and neglect, mistaken jealousy, and a pathological lust for violence. Four teenage girls lured 12-year-old Shanda Sharer to the witch’s castle at midnight on the pretense that another friend was in desperate trouble. There, they cold-heartedly beat and terrorized the girl. Hours later they took Shanda to another remote location and continued brutalizing her. Three more hours later, they took her to another location, drenched her with gasoline, and burned Shanda alive. Her remains were found the next morning, still smouldering. The four teenage girls, who had a history of stalking Shanda, were quickly apprehended and convicted. Shanda’s murder remains one of the most recent horrendous crimes in Indiana history, and a textbook case on the effects of child abuse and social neglect.

The ghost of Shanda Sharer does not haunt the witch’s castle. Despite the brutality of her murder, she seems at rest. Yet the emotional imprint of what happened that terrible night remains. Witches, curses, and ghosts aside, perhaps the greatest haunt at the witch’s castle is sensing the unimaginable horror and suffering of a 12-year-old child at the hand of her supposed new friends.

¹The “Falls” were originally a series of rapids that caused the Ohio River to drop 26 feet over a distance of two and a half miles. At one time, this was the only navigational hazard over the 981- mile-length river, formed by rock outcrops. Today, much of the original falls have been flooded behind the McAlpine Dam. In 1990, a section of the falls area in Indiana became the “Falls of the Ohio State Park.” It contains 390-million-year-old fossil beds that are among the largest, naturally exposed Devonian fossil beds in the world.

²The Métis are a People of mixed North American Indian and Indo-European descent. The term Métis' is a French slang word that refers to a person of half-breed, mongrel, cross-bred, mestizo, or metif blood. The Jesuit Father Vivier in 1750 first introduced the derogatory term. He believed the very existence of being Métis was against the Laws of God and commonly referred to them as illegal runners of the forests. 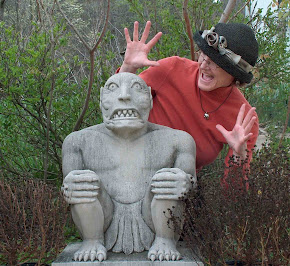 ..........I have always been interested in ghosts, goblins, and things that go bump in the night—or in the sky for that matter.

..........Scoff if you must, but I sincerely believe that the house I was raised in was haunted. This is what initially spurred my interest in ghosts, that and a few other unexplained occurances I've personally experienced and have yet to rationalize.

..........For over thirty-five years, I have amassed a great collection of materials on the unexplained, folklore, and regional history. I even have a ghost hunting kit, given to me by my husband for my 50th birthday!

..........Do ghosts exisit? Maybe, maybe not, but I sure do enjoy rummaging through spooky locales, researching faded old archives and weird internet sites, and writing stories about the local haunts, folktales, and legends of the area. Nothing gives me more pleasure then creeping out my friends and family with my spooky tales woven around actual places and events. With any luck, I’ll be able to publish my stories, reaching a much larger audience, and making their nights as uncomfortable as possible!